Is Italy returning to medieval-era warfare between city-states Milan and Venice? AN’s own Julie V. Iovine reports from Milan that Milanese and Lombardy officials are more than a bit miffed that Venice is proposing to start its own design fair in 2011, seeking to steal the spotlight from the nation’s long-established epicenter of design. Milan has been displaying its prodigious output for nearly half a century at the annual Salone Internazionale del Mobile, and sporadically at the Triannale’s Palazzo del’Arte. But Carlo Guglielmi, the president of Cosmit, which runs the Milan fair, said that Venice’s sophisticated biennale exhibition and marketing organization would like “to pick off a little bit of the Salone for its avant-garde furniture, and from the Triennale for culture.” The annual Milan event attracts more than 300,000 visitors and brings in, according to Italian newspaper Corriere della Sera, at least 7 million euros a year for the local Lombardy economy. Siphoning some of that wealth into Venetian coffers would be a blow to both the Milanese pocketbook and to its powerful design community. Venetian officials are said to be giving a serious look to the proposal, which would add another high-style biennale to its roster of well-known art and architecture events. Whether the dueling design capitals can reach a peace accord over the matter remains to be seen.

Moss Out In Venice According to our friends at Curbed LA, Eric Owen Moss's planned Venice project , on the corners of Venice and Lincoln Boulevards, has been put on the shelf. Fred Mir, who works for the developer, Group III Investments, told Curbed that the neighborhood "didn't like the height," and that they had decided to scrap the project back in August, after a bumpy community meeting. No sign of what will replace Moss's scheme, but we'll be looking into it...

On Friday, Matthew Ritchie opened his new solo show, Line Shot, at the Andrea Rosen Gallery in Chelsea. While the work is impressive as always, most notable is the installation of the newest piece of "The Morning Line," a work unveiled at the Biennale last year (we saw it first hand!) that has begun to trek around the world in different forms, popping up earlier this summer in London, which is where the above video was shot. Inspired by the Big Bang, The Morning Line is notable not only for Ritchie's typically uncanny sense of and attention to detail but also its intricacy and precision, aided in part through a partnership with ARUP's Advanced Geometry Unit, led by Daniel Bosia, and the architects Aranda/Lasch, whose Ben Aranda walks us through the project in the video below. The piece is on view through December 2, as well as after the jump.

For the 53rd Venice Art Biennial, Jorge Otero-Pailos, a professor of preservation at Columbia, made a cast of the pollution on a wall of the Doge’s Palace on the Palazzo San Marco. Trained as a conservationist, he painted liquid latex directly onto the wall and then carefully removed the cast in one sheet. The result, The Ethics of Dust, Doge’s Palace, Venice, 2009, seen in this video, is a luminous scrim that preserves the residue accrued overtime. Such pollution is typically seen negatively, but Otero-Pailos sees it as a record of human activity and questions the impulse to erase these traces of the past.

Down The Drain In That Other Venice Artist Mike Boucher was excited to bring American suburbia to the Venice Biennale, constructing a floating McMansion—complete with cheesy yellow vinyl siding—set to grace the city's famed canals. Unfortunately the house tilted off a failed pontoon and sank; a disaster for the artist (who actually seems to find the whole thing hilarious), but a good symbol for our housing market back in the USA. We're hitching the wagons this weekend to head to the 30th annual Venice Art Walk & Auctions, which include artist studio tours, gallery visits, a silent art auction, live music, and the yummy "food faire". Of course our first stop will be the Art and Architecture tours of some of Venice's coolest houses. We can't wait to see Dennis Gibbens' Multi-Use Townhouse (above). Here are a few more we're excited about: Last fall, the editors of The Architect’s Newspaper spent a week in Venice reporting on the architecture biennale. One of our fondest Venetian memories—the few times we could afford them—was moving around La Serenissima in water taxis.  As we’ve noted before, the Venetian water taxi is the world’s most elegant form of public transportation: hand-made wooden motor boats with tuck-and-rolled leather seating, customized canvas hoods, and spit-shined wooden hulls and decks. Well, the editors are headed back to Italy, this time for Milan’s Saloni di Mobile.

Known as the saloni, the famed furniture fair is a weeklong whirlwind of parties, prosecco, and over-the-top-expensive furniture. While the taxis in Milan sadly resemble their New York  cousins (no romantic excursions to and from the Fiera Rho), the Riva Boat Works—the maker of most of the Venetian water taxis—is coincidentally featured in a current exhibition at the Milan triennale’s Serie Fuori Serie that highlights Italian designs from “experimental research to mass market.” Curated by Silvana Annicchiarico and Andrea Branzi, with installation design by Antonio Citterio, the show should be a knockout. And we intend to be there to reminisce about our luxurious Venetian rides of last fall.

The Venice biennale was founded in 1895 in one of La Serenissima’s few green spaces, the Giardini di Castello. It has occupied a random series of buildings in the park, which include national pavilions (the Belgians built the first in 1907 and the U.S. joined the party in 1930) and an undistinguished hall called the Italian pavilion since the late 1930s. Today the organization that operates the biennales (art, architecture, film etc.) announced plans to change the name of the Italian pavilion in the giardini to the Palazzo delle Esposizioni della Biennale and upgrade its aging infrastructure. While these changes will be welcome by the public, the spaces are all being designed by artists, not architects. The Italian pavilion will be enlarged with a new café designed by Tobias Rehberger, educational space by Massimo Bartolini, and a bookstore by Rirkrit Tiravanija. This pavilion will now be open to the public all year as the biennale’s archives will be moved into the building and entered through the elegant sculpture garden designed in 1952 by Venetian native Carlo Scarpa. The grand and spectacular biennale exhibition space the Arsenale, a short walk from the giardini will also receive a new bridge and entrance at the Giardini delle Vergini and its exhibition space enlarged from 800 to 1,800 square meters. The biennale organization stresses that the renderings of its new facilities are still tentative and may change and one may only wonder if they chose artists, rather than architects, to design their new facilities because of the confusion sowed by architects in the biennale who have long shown a preference to exhibit art not buildings.

Gehry and the Ancient Arts

The three-story timber buttress of familiar forms rising midway through the Arsenale was already pretty impressive on the first day but then a guy showed up and set up shop in the corner to hammer out clay tiles, the 1,000 year old Venetian way, that will ultimately—in two weeks—clad the entire structure.  The process of covering the wood armature in clay is also the first step usually used in making a bronze cast a la the Statue of Liberty. And so naturally we are wondering who’s in the market for a really big Gehry paperweight. 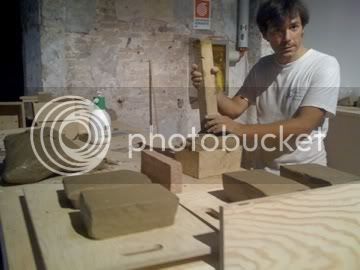 It only took a few hours—and espressos—to catch the jitters going around Venice the day before press opening. Since I was in tow with the Commissioner of the US Pavilion, our own Bill Menking, and crew it was a privileged view, but no less insane as architect elves, ie support staff, scurried around town trying to find that last minute acetate binder, glue gun, 6-color color printer etc etc. The big guns don’t arrive til later today or even tomorrow if they were not invited to Zaha Hadid’s super-dinner at Palladio’s Malcontenta, a powerbroking hour away, at least. (We heard that Thomas Krens was planning to rechannel some back canal in order to take a shortcut there).

Aaron Betsky, the curator of the whole to-do, was troubleshooting from his post on a low wall outside the Italian Pavilion in the Giardini across a gravel path from the Dutch Pavilion, his old haunts. Ole Bauman, the current director of the Netherlands Architecture Institute, was nearby wondering if Rem Koolhaas might show up to see the Dutch Pavilion’s “Archiphoenix,” a research project as only the Dutch can do research projects on the educational implications for architecture on the fire that recently wiped out the Faculty of Architetcure in Delft University. (Hint: He’s won’t. Rem is headed for New York to unveil the design on Thursday for 23 E 22, his luxury high-concept carbuncle condo attached to One Madison Park). Bauman was hosting a kind of hallow’s eve party for all the worker bees from all the national pavilions (there are 32 of them) fueled by kegs of peach juice and prosecco, hummus, and pasta made by an imported organic Dutch chef. Benjamin Ball of Ball Norgues of Los Angeles was on hand happy and hyper about his string installation at the Italian Pavilion whose theme features 50 experimenters and 4 master iconoclasts. Betsksy was explaining what exactly that meant when a staffer whispered in his ear that some Gehry drawings weren’t fitting their frames and he dashed off….