Although the concept derives from adventure playgrounds and similar philosophies of unstructured play, the Brownsville Imagination Playground is technically the first permanent one of its kind in Brooklyn, and the second worldwide. (The first, also designed by the Rockwell Group, opened in 2010 at the Burling Slip in Manhattan). The $5.05 million project was influenced by tree houses, a foil to the monolithic blocks of high-rise public housing for which Brownsville is best known. A curved ramp wends its way through mature trees, while blue foam blocks, cut into funky shapes, along with water and sand, are tools for children to collaborate, build, or create by themselves. Traditional play elements—slides swing sets, chess tables, and a basketball court—round out the program. A year before the Burling Slip playground opened, Rockwell Group tested the designs in Brownsville with former NYC Parks Commissioner Adrian Benepe. David Rockwell elaborated on the process: “When we were asked to do a second Imagination Playground, it gave us a chance to do a couple of things from a design perspective: One, these London Plane trees were incredible, they were a landmark that was important to preserve. We were able to create a path that weaves around the trees. Like the lower Manhattan playground, it’s a playground you can see from 360 degrees. It’s really a community space.” 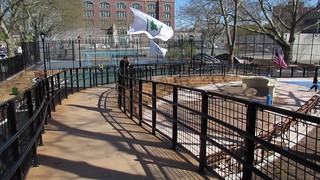 This reporter dodged zooming children and risked limb (well, ankle—platform sandals were a bad choice for this assignment!) to give you, dear readers, a panoramic view of the park from the bridge. (Look closely at 0:55 in the video above and you can see another local landmark, the Kenneth Frampton–designed Marcus Garvey Village.)